Born in West Ukraine (USSR in 1959), Yaroslav Melnyk is graduated from Lviv (Lwów/Lvov/Lemberg) University and did his postgraduate studies at Maxim Gorky Literature Institute in Moscow.

In 1997, the novel “Les Parias d’Eden” (The Pariahs of Eden) was published by Robert Laffont Publishers in Paris. It received accolades from France’s literary critics and was praised by the country’s press. Critics call him a mystic and existential writer.

He lives between Lithuania and France.

Yaroslav Melnyk was a well known critic in Ukraine before moving to Lithuania and becoming a Lithuanian writer of Ukrainian descent. However, he has in 2012 enjoyed a literary return to Ukraine.

He’s a winner of numerous competitions and awards, author of more than ten books which have been published in European countries. Besides Lithuanian and Ukrainian, his works have been translated into French, English, German, Italian, Polish, Romanian, Croatian, Belarussian, Esperanto and other languages.

„Critics call Melnyk’s novellas works of science fiction, metaphysical fiction, or philosophical stories, and refer to his novels as anti-utopian. In truth, however, Melnyk’s genre is best described as postmodern allegory. For Melnyk, stories, characters, and events are not as important in themselves as they are as metaphors:

‘For me, life is like a metaphor, a symbol. It is, in fact, a metaphor. In my short prose, in my novels “Tolima erdvė” (Distant Space) and in “Maša, arba Postfašizmas” (Masha or the Fourth Reich), I create what appear to be imagined worlds. In truth, this is our world — the one you and I inhabit.’ – Virginija Cibarauskė 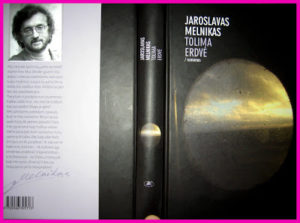 His novel “Tolima erdvė” (Distant Space, published in 2008), devoted to the problems of state control exercised over its citizens, was selected among the five best books (shortlist) of the year (Book of the Year 2009, Lithuania).

“Distant Space“, the winning novel by Yaroslav Melnyk is a dystopia which explores the issue of freedom. The novelist writes about the freedom to see; to escape the world of the blind; but also to escape the world of those who can see – and who rule the blind. These are themes found in literature around the world, and through its protagonist’s journey, this novel very effectively explores what freedom means and what is its price.” 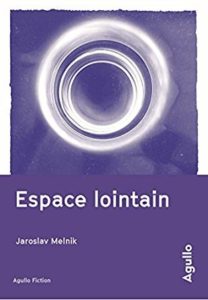 In 2017 “Tolima erdvė” (Distant Space) was translated into French and was published in France with the title of „Espace lointain” by Agullo Press.

„Yaroslav Melnyk is the worthy successor to Bradbury and Orwell, and “Distant Space” (Espace lointain) is a novel that makes us think about our own societies and questions the notions of freedom and free will with great finesse.” 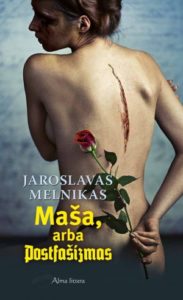 His dystopian novel “Masha, or the Fourth Reich” (published in Lithuanian as ‘Maša, arba Postfašizmas’/Masha, or Post-fascism) is shortlisted for “Books of the Year 2014”.

In 2016 it was published in Ukraine (shortlisted for the BBC Book Of The Year 2016), and became a bestseller.

“In a futuristic novel with a sharp plot titled “Masha, or the Fourth Reich”, which was described by critics as a “shocking work about Nazis and intense love”, the author develops anti-utopian genre and analyzes the sins of humanity” (Planet News’ review).

Melnyk’s books have been among the best Lithuanian and Ukrainian books of the year a number of times, the book “Kelias į rojų” (The Road to Paradise) have been nominated for Europe Book Prize, and his novel “Distant Space” won BBC Book of the Year in 2013.

His book, “The Paris Diary“ (2013) became a bestseller in Lithuania.
His work is characterized by its constructivist and philosophical approach, by existential problems and intriguing combinations of science fiction and realism.

Critics call him “a Neo-Symbolist of Lithuanian literature” and “Yaroslav Melnyk is the most cosmopolitan Ukrainian writer of the 21st century”.