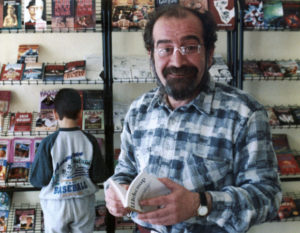 Agop Melkonian was a Bulgarian writer of fantasy and SF of Armenian origin, a playwright, translator, journalist, university lecturer and book publisher. He was born in Burgas (Bulgaria) on the 10th of March 1949 and died on the 23rd of July 2006 in Sofia, the capital of Bulgaria.

A graduate engineer, Agop Melkonian was long been a journalist to the weekly newspaper ” Orbita “, where he wroted about the latest scientific discoveries in the field of physics, technology and astronomy.

Translator of Armenian Literature and Poetry, Agop Melkonian published his translations to his Erato-Art Publishing House.

Agop Melkonyan was also one of the founders of the Department of Armenian Studies to the Sofia University and a Professor of Armenian Philology.

He was a member of the Union of Bulgarian Writers.

As a writer, Agop Melkonian is one of the most popular authors of Bulgarian literature. Author of dozens of books – novels and collections of fantasy short stories – and a large number of plays (three of which are featured on stage) and film scripts. His works have been translated into nine languages.

As translator, Agop Melkonian had collaborated with George Bakalov Publishing House for the selection of the Galaxy Library series. He had translated works by the Strugatsky brothers, Kyril Bulichov, Ruslan Sagabalyan, Fredric Brown, Edgar Allan Poe, and others.

Agop Melkonian was publisher of “Omega”, the science fiction journal and editor of the monthly magazine “Wolverack”, later renamed “Zona “.

Agop Melkonian was the winner of the first Grafton Fiction Award in 1991.

A Writing Contest for up to 1500 signs fantasy texts dedicated to the momery of Agop Melkonian is organized yearly by the electronic magazine “The Gatherings of Troubadours” and the Melkonian family.

In short: stories up to 1500 words, any sub-genre;  one can submit stories in English.

Conditions
The organizers are expect your stories in a volume of up to 1500 words in Times New Roman or Courier, font size 12, in .odt, .doc, .docx or .rtf formats.

Genre and form: Literature of ideas in all classic and modern categories (science fiction, fantasy, horror,  including genre hybrids). The literary and conceptual qualities of the work will be appreciated and various narrative styles within the volume.

Stories in any foreign languages can be sent but the organizers do not guarantee that they can provide a timely and quality translation so that the work competes on a par with those written in bulgarian. In this sense, the translation remains the responsibility of the participant.

Number of works: Just one story is allowed by an author.

Additional Works Requirements: Participating stories must be author’s, and not published in any form (on paper, on the Internet, in the form of audio and / or video). If you wish to send us your already published work, for publication outside of the contest, do it through the regular channel for contacting the magazine . Stories that have participated in previous editions of the contest are not allowed. Stories that do not meet the conditions will not be allowed to participate.

How to send us your story:

Send the stories to the competition’s email:

In order to be identified in the final ranking, the e-mail for your participation in the competition must contain: