The organising committee of each Eurocon is selected by vote of the participants of the previous event. The procedure is coordinated by the European Science Fiction Society.

The first Eurocon was held in Trieste, Italy, in 1972.

Unlike Worldcons, Eurocon is usually a title attached to an existing convention.

The European SF Awards are given in most of the conventions giving recognition to the best works and achievements in science fiction.

Next year, in 2018, the French National SF Convention will be held jointly with EUROCON (The European SF Convention) in Amiens, France, between 19th-22nd of July.

Both conventions are organized by a committee coordinated by the writer and editor Pierre Gévart. 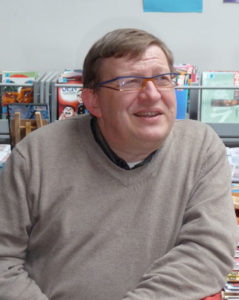 Pierre Gévart is writing SF, mainstream, drama and he has pursued a career in the senior civil service and has written extensively on the methodology of administrative examinations, or on areas of knowledge related to them.

Pierre Gévart was the founder, in 2005, of the science fiction fanzin “Géante rouge” (Red Dwarf), and became in December 2007 the editor-in-chief of the French SF magazine “Galaxies”, the main SF publication in France.

In 2005, Pierre launched the “Prix Pépin”, a science-fiction micro-texts competition.

In 2010, following the brutal disappearance of Alain le Bussy, president of the jury of the Prix Infini, Pierre took over, renaming this prize: “Prix Alain le Bussy”. Each year, this distinction is attributed to an unpublished work, new science fiction exclusively, then published in the magazine “Galaxies”.