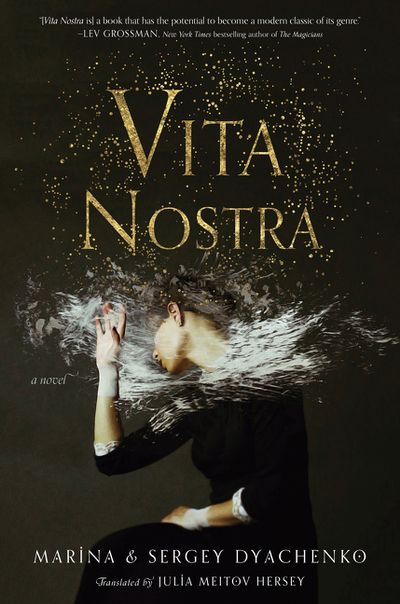 Julia Meitov Hersey’s translation of “Vita Nostra” novel has been published by HarperCollins Publishers and will be available on November 13th, 2018.

“Though they’ve been publishing non-stop since their first book, The Gate-Keeper, was released in 1994, only The Scar, Diachenkos third book, has been translated into English (it was released by Tor in 2012).

Until now, that is: in November, Harper Voyager will release Vita Nostra, originally published in Russia in 2007, and named the best fantasy novel of the 21st century at Eurocon 2008.

It has also won some eight literary awards in Russia, and director Timur Bekmambetov  (Wanted, Night Watch) has acquired the rights and hopes to make it into a film.” 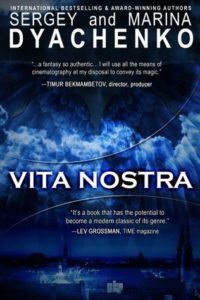 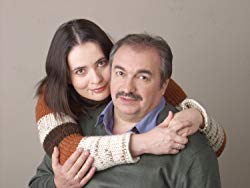 They write in Russian, but also often first publish their books in Ukrainian.

The Dyachenkos hail from Kiev and currently reside in California.

Marina and Sergey claim that the bulk of their work is “M”-realism (a possible guess is that “M” stands for magic, but it was never confirmed by either author).

Their first work, “The Gate-Keeper” (Russian: Привратник), was published in 1994.

This novel received the “Crystal Table” Prize (Russian: Хрустальный стол) at the book festival Zoryany Schlyach, the novel was awarded the title “Best Debut Work” during EuroCon competition in 1995. 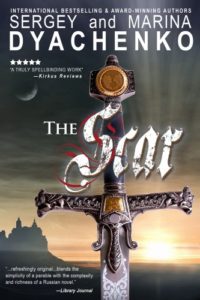 With publishing of “The Scar” (Russian: Шрам) (1997), the sequel of The Gate-Keeper, Dyachenko established themselves as masters of psychological fantastic fiction.

“The Scar” has received “Sword in the Stone” award for best fantasy novel in 1997.

In 1996 a new novel, “The Ritual” (Russian: Ритуал) was published – a story about princess and the dragon. This work is very strange and unusual, since the dragon in this tale is a half-human. This novel did not receive much attention and was not awarded any prizes. 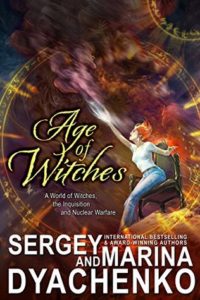 The novel “Age of the Witch” (1997) (Russian: Ведьмин век) has a unique setting – it contains characters from various (mainly Slavonic) mythologies, creating a unique background. This novel received a literature award from the magazine Rainbow (Russian: Радуга) in 1997 and the “Zilantkon” – “Great Zilant” prize (Russian: Зиланткон — Большой Зилант) in Kazan in 1998. 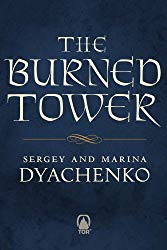 The novel “Armaged-Home” (Russian: Армагед-дом) (1999) is a result of the long-term effort, written in the genre of social science fiction. The book describes different periods of the female heroine’s life and the society she lives in. In the opinion of many critics and readers, it is one of the best Dyachenko’s novels.

The “Green Card” (2000) (Russian: Зелёная карта) – this work is not a fantastic novel. It is a tale about people from Kiev, who have received an opportunity to immigrate to the United States. A screenplay was based on this book.

A variation on Cervantes’ classic, novel “Last Don Quixote” (2000) (Russian: Последний Дон Кихот) became a base for a theatrical play. The novel was awarded the “Bronze Snail” (Russian: Бронзовая Улитка) (2001).

The novel “Magicians Can Do Anything” (2001) (Russian: Магам можно всё) was awarded the “Golden Caduceus” award at the “Golden Bridge – 2001” festival.

In 2001 Marina and Sergey Dyachenko were awarded the “Aelita” (Russian: Аэлита) prize.

The novel “Varan” (Russian: Варан) was awarded the “Bronze Caduceus” prize at the “Star Bridge -2004” festival.

The novel “The Pentacle” (Russian: Пентакль), in co-authorship with A. Valentinov (Russian: А.Валентиновым) and H. L. Oldie (Russian: Г. Л. Олди), was awarded the “Golden Caduceus” prize at the “Star Bridge – 2005” festival.

The novel “Wild Energy. Lana” (March 2006) (Ukrainian: Дика Енергія. Лана) – is a fantasy fairy tale, written under impression of the music of the Ukrainian singer Ruslana (Ukrainian: Руслана). The book was dedicated to Ruslana as well. This novel is full of action, rhythm and energy. The novel was awarded the “Bronze Caduceus” prize at the “Star Bridge – 2006” festival.

In 2006 they published first part of the fantasy series named “The Key of the Kingdom” (Russian: Ключ от королевства) and its sequel Oberon’s Word (Russian: Слово Оберона); trilogy was concluded with “Evil Has No Power” (Russian: У зла нет власти) in 2008. “Alena and Aspirin” (Russian: Алёна и Аспирин) – a psychological fantastic novel was published as well in 2006.

“Vita Nostra” was published in 2007, the first novel in the associated “Metamorphosis” cycle. The book collected dozen of professional and readers national awards.

Julia Meitov Hersey’s translation of “Vita Nostra” will be published by HarperCollins Publishers in November of 2018.

The “Copper King”, fantasy novel loosely coonected to “Varan”, was published in 2008.

Maryna and Serhiy Dyachenko are recipients of the most prestigious literary awards in the science fiction in Russia and Ukraine. Practically every novel they have written, in addition to several short stories, have received various awards.

They were honored as the ESFS’s Best Writers of Europe in Eurocon 2005.

Some of their novels have also been translated into other languages (ex. Polish, English etc.).

“The Scar” became their first major book publication in United States in February, 2012 from Tor Books.

“Magicians May Do Everything” (Russian: Магам можно все)

“The Pentacle” (Russian: Пентакль) (novel with a series of the short stories; co-authored with Andrey Valentinov and H. L. Oldie)

“The Key of the Kingdom” (Russian: Ключ от королевства) (published in Russian and Ukrainian)

“Vita Nostra” (to be published in English in November of 2018)