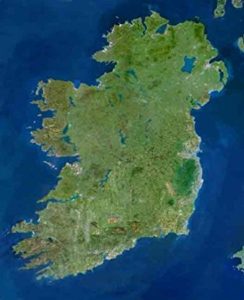 In 2019, both Worldcon and Eurocon will take place in the Emerald isle of Ireland.

Ireland (Irish: Éire [ˈeːɾʲə]) is an island in the North Atlantic. It is separated from the Britain isle to its east by the North Channel, the Irish Sea, and St George’s Channel.

Ireland is the second-largest island (area of 84,421 km2) of the British Isles, the third-largest in Europe, and the twentieth-largest on Earth. The island’s total population is 6,605,255.

The earliest evidence of human presence in Ireland is dated at 10,500 BC.

Gaelic Ireland had emerged by the 1st century CE.

The island was Christianised from the 5th century onward.

Following the Norman invasion in the 12th century, England claimed sovereignty over Ireland. However, English rule did not extend over the whole island until the 16th–17th century Tudor conquest, which led to colonisation by settlers from Britain. 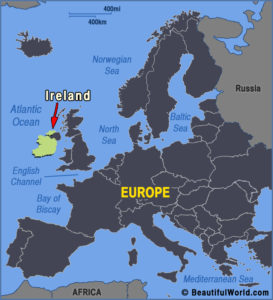 The Irish War of Independence in the early 20th century was followed by the partition of the island, creating the Irish Free State, which became increasingly sovereign over the following decades, and Northern Ireland, which remained a part of the United Kingdom.
Northern Ireland saw much civil unrest from the late 1960s until the 1990s. This subsided following a political agreement in 1998.

In 1973 the Republic of Ireland joined the European Economic Community while the United Kingdom, and Northern Ireland, as part of it, did the same.

Irish culture has had a significant influence on other cultures, especially in the fields of literature. Alongside mainstream Western culture, a strong indigenous culture exists, as expressed through Gaelic games, Irish music, the Irish language and the Irish literature.

Congratulations to the Celtic tigers, keep up your good work and let’s have fun together in Ireland in the summer of 2019 ! 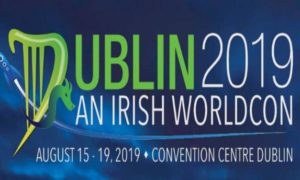 “Hosting a Worldcon and an Eurocon in Ireland, is motivated by many thoughts and feelings, but showing fans from across the world, the country, its beauty, the wonderful scenery, and indeed the now famous sights. The SF community on this island is small enough, that it becomes obvious when hard graft and serious efforts are being made, and I congratulate the participants on their success. I look forward to seeing their plans evolve and come to fruition.” – Lisa Macklem 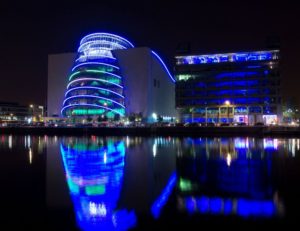 The venue is Dublin’s Convention Centre (completed in 2010) who already hosted its hundreds of events, having brought thousands of people into Ireland from overseas.

This fantastic venue offers a wonderful space for any Worldcon.
The venue has a spacious exhibit hall; The Forum at 2721m2; The Auditorium, which is suitable for programme plenaries as well as events, seating 2000 people in large comfortable seats, and The Pub, which is a 897m2 hall, that will be our main Hospitality space.
The modern venue boasts an incredible level of fully built-in technical support, which allows for future expansion and new developments to be quickly integrated into existing features.

The venues intended to be used are the newly completed Waterfront Convention Centre and the Hilton Hotel.

These two venues are located in the centre of Belfast with spectacular views over the River Lagan. The buildings are right next door to each other, and in fact there is a connecting corridor linking them so attendees do not have to go outside to go from one to the other.

The Belfast Waterfront is a modern convention centre with considerable flexibility and their hotel is right next door, linked physically by a covered walkway.

On the bank of the River Lagan, the venue is in the City Centre of Belfast, and indeed, less than 400 metres from Belfast Central railway station, which has a direct link to Connolly Station in Dublin which is itself a kilometre away from the Convention centre Dublin, so, well you only have to walk a mile between both venues.

In the meantime, just to get in the mood you could read Jack Fennell‘s study “Irish Science Fiction” : 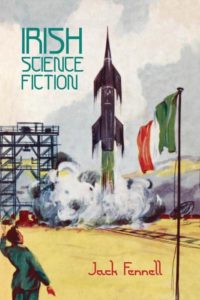 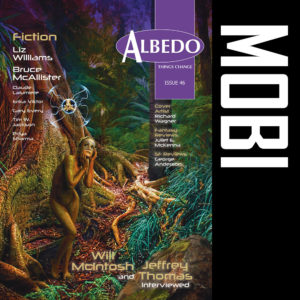 And of course, Albedo One, the Irish SFFH Magazine:

Albedo One is an Irish horror, fantasy and science fiction magazine founded in 1993 and currently published by Albedo One Productions. Albedo One is often credited as holding the position of the “longest running Irish magazine of speculative fiction” and has been billed as “Ireland’s answer to “Interzone.”

Since 2004 Albedo One has sponsored the Aeon Award, a fiction contest aimed at promoting new writers and writing in the speculative fiction genres.

“Albedo One is Ireland’s longest-running and foremost magazine of the Fantastic. Since 1993, we have published stories from both Irish and international authors which push at the boundaries of Science Fiction, Fantasy and Horror.

Albedo One is the primary source to keep up with Irish speculative fiction writing.

As Europe’s westernmost outpost, we believe passionately that one of our roles is to bring unique and excellent speculative fiction written and published in other European and World languages to an English readership.

To this end we have initiated a program of translations to and from English with our colleagues and partners beyond Ireland. Already, we have published in translation the Winner of the German Science Fiction Award 2008, the story “Homeward Journey” by Frank W. Haubold (translated by Wilf James), with more to follow.

Winner of European Science Fiction Society Best Magazine Award 1997, and Best Publisher 1997 and 1999, Albedo One is published between two and three times a year. Stories from Albedo One have garnered numerous Honourable Mentions and been reprinted in prestigious Year’s Best volumes by major editors in the genres of science fiction, fantasy and horror, including Ellen Datlow, Kelly Link and Gavin Grant, Rich Horton, and Gardner Dozois.

The regularly changing online content, featuring some of the best of the contents of Albedo One, as well as material exclusive to the internet, including author interviews, book reviews and movie reviews and the Albedo 2.0 Fiction Showcase, will give you a flavour of what we have to offer.

There is, however, no substitute for reading your own copy of our magazine! Issues are available in print and low-cost downloadable PDF format. Visit the Albedo One Shop to see a full selection of back issues and other titles, and order Albedo One today!” – Albedo One