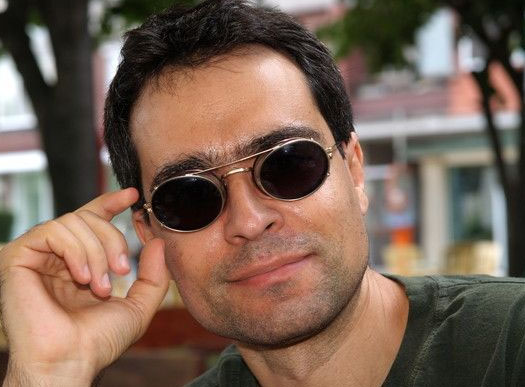 Yancho Cholakov is born in the seaside town of Burgas in 1967. As a schoolboy he is published in literature magazines. He earns many national awards. In the first years after falling of Berlin wall he founds “Ofir” (1993-2001): one of the first Bulgarian SF publishing houses. The writings of Cholakov are marked with extraordinary style and allegoric constructivism, but not just as abstract games. His worlds, though an exotic and colorful, are close to everyday details familiar to everyone. At the same time they are full packed with visions for past and future worlds.

In “There Is Not A Night Without Darkness” he tells fiction historical events about never happen unrest in medieval Spain.  In “antic” western style story (“Htonic Creatures”) he describes the Troy war as a conflict between the human race and intelligent arthropods. In “Ricochet” against each other stand Gorgon Medusa and monstrous basilisk from Upper Prussia. The poetic fantasy “Depopulated” a soldier dreams that he is a guard and executor simultaneously. The “Xylophone” shows in Zelazny style the clash between Thracian gods during several millenniums. “Burn a Candle For The Devil” in the self invented genre of “folk-punk” brought to his author the award of the biggest Bulgarian SF publishing house Argus. Other books from Cholakov are “History of The Lonely Soldier” (1995), “Myths for Burned Darkness” (2006), “Exercises for Unmoral Writings” (2009). The apocryphal novel “The Twelve Robbers” will follow soon.

In his article about Bulgaria “Locus” magazine writes about Cholakov “as a really original writer, who goes far beyond the well known SF tradition, brining something new to our SF perceptions”. According to the Russian critique Evgeny Haritonov “Yancho Cholakov is one of the most remarkable writers and exceptional stylist in the modern Bulgarian SF”.