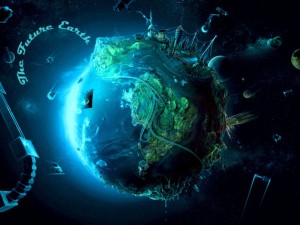 The “Past, future, and fantasy climate change – from the mid-Cretaceous to Middle Earth Lecture” inaugural lecture will be given by Cabot Institute member Professor Dan Lunt.
As a curiosity-driven scientist, understanding the past climate of our Earth (from the scorching greenhouse of the mid-Cretaceous, to the frozen wastes of the last ice age) is of fundamental interest. However, to what extent can such understanding improve our predictions of future climate change?  And what can we learn about climate from the Lord of the Rings ?!

Prof.Dan Lunt, University of Bristol, School of Geographical Sciences, UK  : “My research interests are broad, but a particular focus is on icesheet-climate interactions, both in the past and in the future.Other research focuses on understanding aspects of the palaeo record. The analysis and interpretation of palaeo data has led to the formation of many hypotheses regarding the mechanisms affecting past climate change. Models are ideal tools to test these hypotheses. In addition, modelling can itself lead to hypotheses which are testable by the collection and interpretation of new data, and can indicate regions in which new data could usefully be collected.

I am also carrying out work on the climatic impacts of geoengineering – the “intentional large-scale manipulation of the environment”.

I am an executive editor of the new EGU journal, Geoscientific Model Development, which is primarily for model descriptions, from box models to GCMs. The philosophy behind the journal, which aims to improve rigour and traceability in climate modelling, is described here.”

Humans are the only species capable of imagining the future while at the same time ignoring the consequences of the future we are creating.
“Breath of Life” reveals why humans are in denial about catastrophes of our own making that could come to pass sooner than we think. Filmed in Europe, Scandinavia, North America and Hawaii the film features breathtaking cinematography and insightful commentary from the world’s greatest evolutionary biologists and psychologists – but it is the common sense of farmers in the drought stricken western United States and the wisdom of Hawaiians from the most isolated place on the planet that show us the way back to a more honest and authentic relationship with the world and reality.
Following the film, Bruce Hood, Professor of Developmental Psychology in Society (University of Bristol and Cabot Institute) will discuss the issues with director Susan Kucera.
Dr. Richard Dawkins

Author, ‘The Limits to Growth Revisited’

President of the Association for peak oil and Gas (Italy)

Professor of Sociology University of Oregon

Author, ‘Darwin among the Machines: The Evolution of Global Intelligence’

Professor of Anthropology and Director of the Institute of Social and Cultural Anthropology Oxford University, UK

Author, ‘When Corporations Rule the World’, ‘The Great Turning’

Author, ‘Requiem for a Species’,

‘Earthmasters: The Dawn of the Age of Climate Engineering’

Professor of Climate Strategy at the Bl Norwegian Business School

Deputy Director of the World Wildlife Fund from 1994 to 1999

Professor of Psychology and Director of the Cognitive Development Center, University of Bristol, United Kingdom

Author, ‘SuperSense: Why We Believe the Unbelievable, ‘The Self Illusion’

Author, ‘The Collapse of Complex Societies’, ‘The Way the Wind Blows: Climate, History, and Human Action’, ‘Drilling Down: The Gulf Oil Debacle and Our Energy Dilemma’.

Author, ‘The Folly of Fools; the Logic of Deceit and Self-Deception in Human Life’, ‘Natural Selection and Social Theory’, ‘Genes in Conflict’

Journalist and Author, ‘End of Oil’, ‘End of Food’

Founder Center for Media and Democracy, PR Watch and SourceWatch

Author, ‘Weapons of Mass Deception’, ‘Toxic Sludge is Good for You’

Visit the website breathoflifefilm.com for further details of the film.
This event is part of Bristol 2015 and is supported by the Cabot Institute and Bristol Festival of Ideas.
http://www.bris.ac.uk/cabot/events/2015/past-future-fantasy.html