Interview with Brian Nisbet on the Worldcon-2019-bid for Dublin

Dublin has announced a Worldcon-Bid for 2019. We are happy that Europa SF got an interview with Brian Nisbet about this interesting project! The interview was conducted by Nina Horvath. 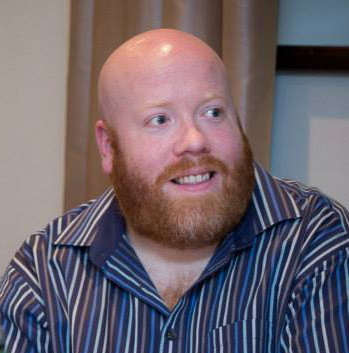 Europa SF: Hello Brian, thank you very much for the interview! Today we are going to talk about the Worldcon bid for Dublin 2019, but before we start, I´d like to know a little bit about you. How do you spend your time when you are not working on this bid?

Brian Nisbet: Thanks for the opportunity to talk to your readers! The easy answer here would be to say “going to conventions!” But it isn’t quite that simple. My day job is as Network Operations Manager for the Irish National Research & Education Network, providing Internet services to all levels of education in Ireland. When I’m not working I play a lot of computer games, read, watch movies, write (primarily roleplaying material) and spend as much time as possible with my wonderful wife. But I have been running conventions for 20 years, most recently the Dublin Eurocon and the Discworld Convention as well as a small gaming convention I run every year in the south of Ireland. 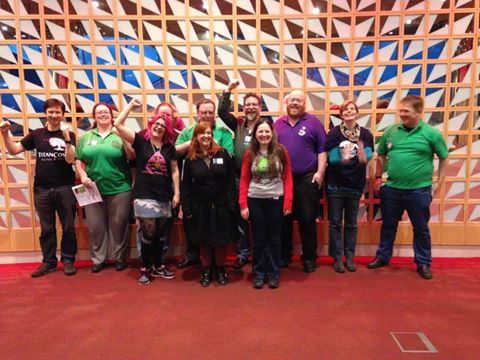 The bidding Team for the Worldcon 2019 in Dublin.

Brian Nisbet: Right now we have a committee of seven, with a wider bid team of 38 people (at time of writing. You can see all of the names on our webpage. James Bacon, who has a storied history in conrunning, including Director of Programme for Loncon 3, the 72nd Worldcon, is our Chairman. Emma England, another veteran conrunner, is heading up our Promotions & Volunteers activities. Gareth Kavanagh and John ‘JC’ Clarke, our Registrar and Treasurer, are both heavily involved in Octocon the Irish National SF convention and the recent Eurocon. Tammy Coxen, who ran the 2014 NASFIC in Detroit, is taking care of our North American activities and Esther MacCallum-Stewart, a highly qualified academic with lots of con experience is keeping us organised.

My role is as Irish Officer, overseeing all of our promotions and activities in Ireland, a small country, but one with over thirty genre events a year. I’ll be working to engage the community and recruit people to the cause as we build (hopefully!) towards 2019.

Europa SF: What would be the advantages for fans to attend a Worldcon in Dublin over attending a Worldcon anywhere else in the world?

Brian Nisbet: Ireland is known all over the world as a place of stories, mysteries and magic, a land always looking towards the future, but deeply rooted in its long and complicated past.  Stories are a part of Ireland’s make up and we believe a Worldcon in Dublin will be a special occasion for everyone that joins us. The island has birthed, created and welcomed writers, poets and artists going back into legend and those traditions are still alive and well in every house, pub, coffee shop and on every street.

In addition to the stories and those that tell them, Dublin is a vibrant, modern city, home to a million people, while still retaining the warmth and welcome that has made it so famous. It’s not for nothing the residents call it the biggest village in the world. Our proposed venue, the Conference Centre, Dublin (CCD) is very new and was designed to the highest specifications. It’s already held international conferences and political gatherings, so we firmly believe Worldcon attendees will not find it wanting!

Europa SF: Dublin 2019 – that is quite far in the future. But this has already keeping you busy for quite a while. When and how did the idea of bidding came up and what did you do so far to bring the bid forward?

Brian Nisbet: We’ve been talking about the idea of a Worldcon in Dublin for as long as I can remember, but it sadly it never came to anything, until now. The idea was pitched to Irish fandom by James Bacon. He took a group of us into his confidence in 2012 and then made a whole convention keep his secret at Octocon in 2012. It sparked the imagination immediately and with a growing community in Ireland and with planning for the 2014 Eurocon well underway it seemed like the right time to finally turn fantasy into reality.

Since then we’ve been extremely busy! The idea of the bid was made public at the 71st Worldcon in San Antonio in 2013. After that we worked away in the background until the “official” launch at Loncon3 and Shamrokon. We received a huge amount of support at both cons from the attendees, be they from Ireland, Europe, North America or further afield. We’ve pitched the con during the Fannish Inquisition at SMOFcon and our bid team has started to pop up at cons around the world. Right now it’s all about building that team, getting the world out and obtaining support, but things are going very well so far! 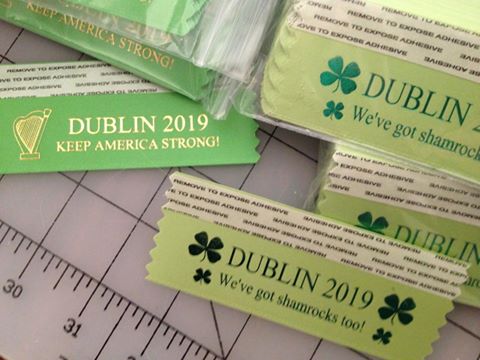 Ribbons for the bid of Dublin, California.

Europa SF: There is another bid for Worldcon 2019, also from Dublin – but the one in California! Obviously they are making fun of your bid. What is your point of view about this?

Brian Nisbet: We love it! San Marino have joined in now as well (apparently they have cake) and we feel hoax bids are an integral part of the history and lore of Worldcons. However there are Dublins in more places than just Ireland and California, so if any other Dublins want to declare we’d be very happy to show the world just how far the Irish influence has spread around the world and why they should come and see the real thing in 2019! 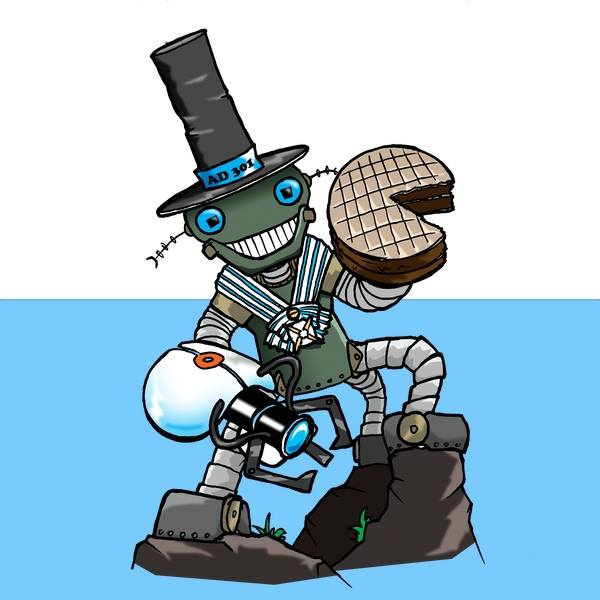 Europa SF: And what about other bids for 2019, did you notice any and if, what are your chances to win your bid over them?

Brian Nisbet: There aren’t any other bids for 2019 so far, but should any emerge we’ll be very happy to run a race against them. With or without opposition we’ll be working extremely hard to show world fandom that Dublin is the best place for the 77th Worldcon. We firmly believe the time has come for Irish fandom to bring this event to the island and we’re confident our bid is extremely strong.

Europa SF: You are into Worldcon- as well as into Eurocon-organizing. Can the Worldcon be imagined like the Eurocon, just on a larger scale or do these events differ a lot from each other?

Brian Nisbet: The two events are very different. Yes, Worldcon is bigger and due to that size things can happen that would be impossible for a Eurocon, but it is, in my opinion, very wrong to think of a Eurocon as just a small Worldcon. Obviously the two events share a lot of characteristics and often attendees, but the atmospheres are undeniably different. For me this difference is quite hard to put a finger on, but there’s no question that Europe approaches SF and conventions quite differently from North America, probably because of the myriad of differences in approach within Europe itself.

Europa SF: So what if another fan thinks that Worldcon 2019 in Dublin (Ireland!) would be great, probably someone from a foreign country, but probably someone living next door: How can this person support your bid?

Brian Nisbet: There are two main ways to support the bid right now, time and/or money! Anyone can become a supporter by signing up on our website and there are several options with associated advantages & discounts on a full membership should the bid be successful.

If you’d like to help out more and volunteer you can contact us via our webpage or by e-mailing to us .This is a huge undertaking and we’ll need lots of help. There are many jobs to do, all over the world, so location is irrelevant in this regard.

Europa SF: We are all wishing you good luck for your bid! One last question: When is the next time we can meet you in action at a convention?

Brian Nisbet: We’ll be appearing at cons all over Europe and North America in 2015 and you can keep track of us on Twitter @dublin2019 or on Facebook . Our next big presence will be at Boskone in Boston, USA in early February and there’ll be lots of us attending Eastercon – Dysprosium in London, UK in April. In Ireland we’re planning  to have flyers or a bid team member at every genre event (comics, anime, gaming and SF/Fantasy/Horror) this year. The high points of the year will be at the Dublin Comic Con and, of course, Octocon. Finally we will, of course, be very visible at Sasquan, the 73rd Worldcon in Spokane, Washington, USA. Come and say hi!