Fly the Bloon to the Moon ! with the Spanish Zero2infinity Aerospace Company 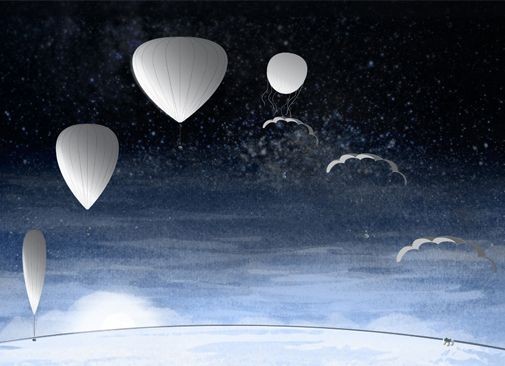 No, not exactly to the moon but to the near-space. It’s not actually space — balloons only travel to a height of between 30-40km, with 36km being seen as optimum; to reach what is defined as space, you need to travel to a height of 100km. “But it is pretty close and it gives you a totally different experience,” says Michael Lopez-Alegria, former NASA astronaut and president of the Commercial Spaceflight Federation.

The Near-Space flight will take you to the edge of our atmosphere, where you will see it glow bluish and thin – a delicate protection from the harshness of the Cosmos.

In the bloon you will enjoy a totally new way of being one with your home planet.

Imagine your most graceful and pleasant journey. Imagine you are flying near space through the ozone layer and beyond till the edge of our atmosphere, bluish and thin – a delicate protection from the harshness of the Cosmos, but all caring for it. The most amazing views of our planet in her true glory from the edge of our world. Imagine the change to see how the stars and Sun blaze day and night. Now stop imagining; It is going to happen and you can be in it. It is calm, it is quiet, it is private, it is bloon. Discover it!

The bloon is a spacecraft in development by the company zero2infinity which consists in a high-altitude balloon to perform manned flights in the near space.

It also refers to the balloon-borne spacecrafts product range of the same company: bloon, minibloon, microbloon and nanobloon which are differentiated among them by its size.

Considering that an helium balloon is the only responsible for lifting the load into the near space, it is considered as a zero emission spacecraft. With this technology, “bloon” would carry up to 4 passengers and 2 pilots (6 total crew) to an altitude as high as 36 km (22 mi, 118,110 feet). The vehicle would take from 1.5 to 2 hours to reach near space altitude, and then stay there up to 2 hours, with a final descent by parachute after releasing the balloon, using also airbags to smooth the landing. Zero2infinity plans to launch passengers to near space using balloons known as “Bloons” for €110,000 ($124,000) a time.

zero2infinity S.L. is a private Spanish company that designs and operates high-altitude balloon spacecraft. It is developing technology to provide access to near space and outer space using balloon-borne spacecraft and balloon-borne launcher, with a significantly lower impact on the environment among other advantages. The company has been testing high-altitude balloons since 2009 and launching small payloads to space for scientific institutions and commercial firms for testing elements in the near space.

zero2infinity was founded in 2009 by Jose Mariano López-Urdiales (a spanish aeronautical engineer) in Barcelona, who is the current CEO company. zero2infinity has its headquarters in Cerdanyola del Vallès, Barcelona (Spain).